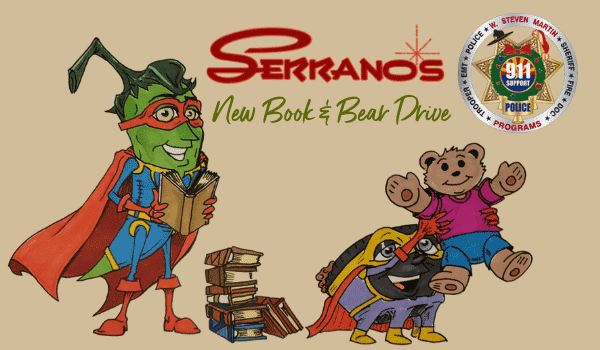 The Serrano family is celebrating 100 years as a family owned business in Chandler, Ariz., throughout the month of September. As part of the celebration, all five Serrano’s locations will be accepting donations of new teddy bears and/or children’s books (min. $10 value) to benefit the W. Steven Martin 911 Toy Drive.

When a donation is made during the month of September, customers will receive a voucher for a scoop of free fried ice cream at any Serrano’s location.

The 911 Toy Drive serves law enforcement, fire and public safety officials, and corrections officers. Gifts are provided throughout the year – not just at Christmas – at no charge to the officials who give the gifts to local families in need.

“An officer who delivers gifts and personal items to a family that may be struggling is an incredible and lifelong positive image that will never be forgotten,” said W. Steven Martin, founder of the 911 Toy Drive, which has been in operation for more than three decades. “We have changed young lives and family opinions in positive ways, one house at a time, and that includes some people in uniform.”

Over the past 34 years, more than 6 million gifts have been distributed to 1 million-plus children through the hands of police, fire and 911 emergency service personnel as part of the 911 Toy Drive.

“This is our second year supporting the W. Steven Martin 911 Toy Drive, a cause that fosters a positive relationship between local law enforcement and members of our community,” said Ric Serrano, president and CEO of Serrano’s Mexican Restaurants. “We look forward to seeing which of our five restaurants collects the most children’s books and bears to support this effort!”

Donations will be accepted during the month of September at all five Serrano’s locations!

← Calling All Artists!Get Ready to Raffle! →
Scroll To Top